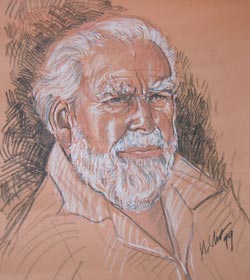 René was born in North London on 19th June 1912, the only child of Annie and George Bazin. His mother was of Swiss descent and his father of French descent.

René was proud of his French descent and always insisted that the final é received its proper accent. He became interested in electrical engineering, joining Plessey in 1934, where he was engaged in the development of Cathode Ray Direction Finding equipment (CRDF). Just before the Second World War René was appointed as Engineer in Charge of CRDF installation, a position he held until 1944. His work on CRDF made a substantial contribution to the war effort, making it difficult for German submarines to communicate, without giving away their positions. He also worked on air-borne radio homing receivers, involving over 100 hours of flying.

From 1944 to 1953 he was Chief of the Industrial Laboratory at Redifon/Rediffusion, where he worked on the hardening of metals, using suitable radio frequencies. In 1953 René resigned from Rediffusion, and less than three weeks later, he married Edythe Galway. He had met her whilst installing CRDF beacons in Northern Ireland and they had two children, Bryan and Chérie, born in 1955 and 1956. René’s grand-daughter, Sarika, was born in 1992.

He was keen to start his own business, H.F.Industrial Services Ltd, using radio frequencies to weld plastics and this was a successful enterprise. Throughout his working life René was very good at encouraging his colleagues. The business was sold in 1963.   His wife, Edythe, had become ill in 1957, with multiple sclerosis and died in 1968.

1n 1971 René and Maria were married and they moved into Dawn Haze, Falmouth. Maria had worked for H.F.Industrial Services Ltd, and knew René’s first wife, Edythe.
He enjoyed a long retirement working in the house and garden, and using their yacht to sail away for holidays. After a long period of nursing at home by Maria, René spent the last four years of his life in the Trevern Nursing Home, Falmouth.

René and Maria joined Falmouth Humanist Group in about 1971, and when Cornwall Humanists Association was formed in 1991 they took the opportunity to join. In 1999 Cornwall Humanists recognised René’s qualities by making him their President for Life. In 1992 René wrote a letter to the Western Morning News. Carrie Langford read the following extract from his letter, at the service of celebration of René’s life.

“You are all intelligent beings, who have evolved by a process of evolution. This is how we believe our planet, and life on it, came about. Each of you is responsible for the manner in which you conduct your life, and your relationship with other people, no one else. Revere truth. Treat all as equals, whilst remembering to show respect where due. Conduct yourself as would give no offence to your parents. Treasure your inheritance, for it is fragile. Waste not nature’s gifts, but conserve them, for they are irreplaceable. Shirk not responsibility. Heed an early Humanist; “This above all: To thine own self be true, And it must follow, as the night the day, thou canst not then be false to any man.””