From the British Humanist Association

The Department for Communities and Local Government (DCLG) has announced a £400,000 programme to ‘strengthen faith institutions’. The fund will be available only to bid-winning charities to support the growth of ‘places of worship’ in Britain. The British Humanist Association (BHA) has criticised the project as a poor use of public money and discriminatory.

Justifying its decision, the DCLG stated that ‘Faith communities make a vital contribution to national life: they guide the moral outlook of many, inspire great numbers of people to public service and provide help to those in need.’ Fitting with previous comments made by senior Government ministers, including the Secretary of State for Communities and Local Government Eric Pickles, the impetus for this enormous spending drive appears to be an unsupported belief that religious organisations and people do more good for local communities than non-religious ones, and so are more deserving of public funds. END_OF_DOCUMENT_TOKEN_TO_BE_REPLACED

A new YouGov survey for the Times shows a pattern of declining religious belief in younger age groups.

Thanks to Maxwell for finding this information. 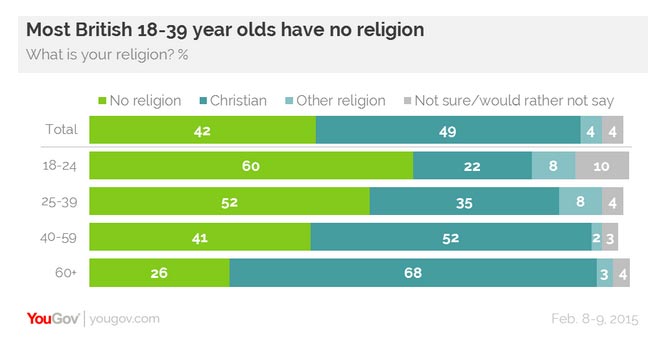 Go to read the full survey