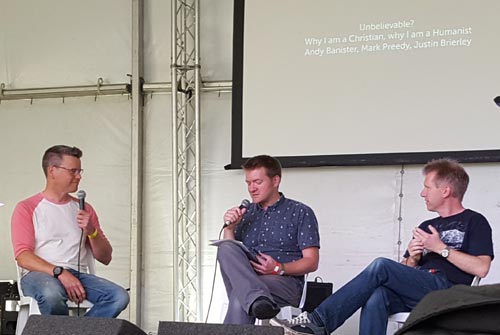 Congratulations to Cornwall Humanist member Mark Preedy for his excellent, rational thoughts at Creation Fest on 9th August at Wadebridge Show Ground. Andy Bannister was putting a Christian view. He is  an experienced speaker, writer, teacher, and full-time Director of the Solas Centre for Public Christianity.  Justin Brierley chaired a discussion in the Showcase Cafe between a Humanist, Mark Preedy,  and a Christian, Andy Bannister. The discussion is to be broadcast at 14.30 on Saturday 12th August  in the programme “Unblievable” for Premier Christian Radio.

In the public question time Peter Edmead,  a member of Cornwall Humanists, asked Andy Bannister if he could supply one piece of evidence for his views. Dr Bannister told us that he could give five pieces of evidence for his Christian beliefs.   He spoke about cosmic fine tuning as evidence, and the life of Jesus, but the questioner was not convinced that any evidence in a scientific sense had been supplied.  There were seven known Humanists in the audience numbering hundreds.  The Humanists were approached afterwards by people trying to convince them of the truth of Christianity.

The discussion was recorded for broadcast on Premier Christian Radio programme “Unbelievable” which goes out at 14.30 on Saturday 12th August. You can listen online or to the podcast https://www.premierchristianradio.com/Shows/Saturday/Unbelievable/Episodes